Fairy tales are becoming an ever popular theme for slot games. Twinkle by Eyecon is one of the latest to utilise the famous stories. Twinkle is based on the tale of Peter Pan, with the flighty Tinkerbell taking the starring role. Set on the high seas of Neverland, this swashbuckling slot has great graphics and a few bonus rounds to keep you entertained. 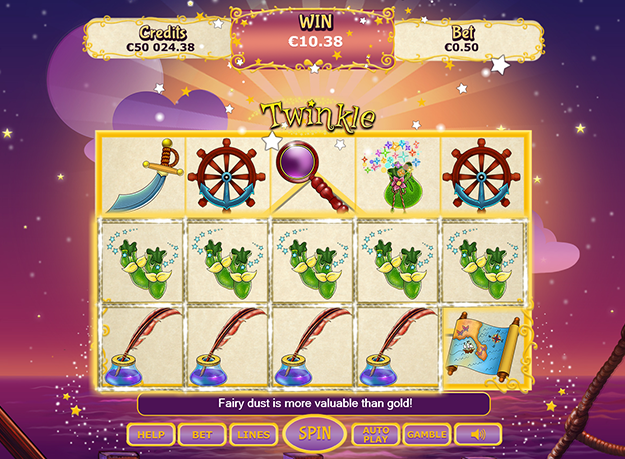 As we mentioned above, Twinkle was brought to the web by Eyecon. This team are adept at making games which become instant hits with players. Examples of their past works include Temple of Isis and the Fluffy Favourites series. Bonus features and well-drawn graphics are priorities to Eyecon.

The Twinkle format is a pretty standard 5 reels and 3 rows. It has a total of 25 variable pay lines, with bets starting from just 1p per spin and rising to a maximum of £50. It’s extremely easy to operate, which is a major selling point of most Eyecon slots. Players of any level of experience will have no problem accessing this game.

The graphics in the Twinkle slot are outstanding. Gone are the lazy poker values that we see in most slot games. Eyecon has dedicated all symbols to its Peter Pan theme. The symbols are a mix of pirate emblems such as the barrel, the wheel and the anchor and those dedicated to magic. You’ll find Tink’s magical slippers and fairy dust. The compass is the highest paying regular symbol. Land 5 to boost you line stake by x5000.

As you’ve probably guessed, Tinkerbell is going to play a huge part in this slot. In this game, however, is known as Twinkle. She functions as both wild and a scatter. Twinkle can replace any symbol except the jar to complete a pay line, whereby all wins are doubled. Landing 3, 4 or 5 Twinkle scatters triggers a free games feature where you’ll receive 15, 20 or 25 spins, respectively.

The Twinkle slot also has an additional scatter in the form of a jar. Land 3 or more jars and you’ll access a pick me feature. Players receive 1 pick for every jar landed. Prizes of up to x100 your total wager can be won! At the end of the Jar Prize Pick feature, all prizes are added together to make up your total win.

Our verdict of Twinkle is that it is a well-drawn slot which provides great bonus features whilst keeping the rules simple. Despite the number of bonus options, players will be surprised at how easy this game is to play. The slot is a cool take on the Peter Pan tale, with players likely to feel a fair bit of nostalgia upon spinning the reels. The bonus games are easy to trigger with the potential to generate big wins, especially with the Jar Prize Pick. For players who want to raise the stakes, check out the gamble feature which is available after every win for a chance to double or quadruple your funds.