Sick of waiting for the sun to come out? Then why not take a trip to a land where the sun is always shining. The land of Paradise Reels boasts clear blue seas and golden sands. It’s the kind of place where you’d expect to find a hammock and be furnished with a fruity cocktail! This slot would brighten up even the darkest days. Although the graphics are not as sophisticated as some that we’ve seen, it is bold, colourful and easy on the eyes. Paradise Reels also benefits from bonus symbols and a bonus game feature. 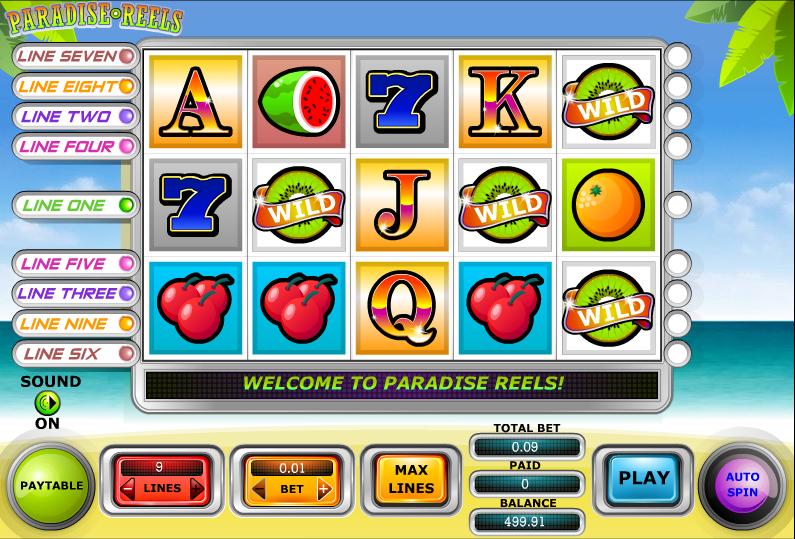 It took us a while to track down the makers of this one. Paradise Reels was developed by Electracade Ltd, a British company which was established in 2004. However, as of 2008 the company was acquired by Orbis. Orbis then became Open Bet, who many of you will be familiar with. So, Electracade is now a subsidiary of Open Bet. Although this is the first of their games that we’ve played, the company has well over a decade of experience on their side so we’re quietly confident that they can deliver a high-standard of slots.

The Paradise Reels slot is extremely colourful. As it’s set in paradise, this is hardly surprising. The graphics are quite rudimentary and are similar to what you’d see in a classic land-based arcade slot machine. However, it’s extremely easy to play.

There are just 5 tabs on the playing screen. From left to right these are the paytable, stake per line, lines, max lines and play. To begin betting just click the stake per bet and the then the lines tab till you come to a total bet that you’ll happy with. Or, you can skip straight to the max bet with help from the max lines tab. There is a total of 9 pay lines, with the top bet per spin being £22.50.

By hitting the pay table, you’ll see the value of the different symbols. They are a mix of playing card values, fruits and traditional slot game icons. Some of these include cherries, watermelon and the lucky number 7. The kiwi is the wild and substitutes for any other symbol in the game. You’ll be able to access the coconut bonus by landing 3 of the coconut bonus symbols.

The Coconut Cash Bonus is a ‘pick me’ feature, where you’ll be asked to select different symbols to uncover a prize. In this case, the items are coconuts. The aim of the game is to match 3 of the same amounts. Uncover a match and you’ll take home the displayed amount!

Paradise Reels has a great theme. It definitely puts us in the mood for a bit of sun, sea and sand. However, although spinning the reels is very easy, the payable and bonus features are not explained very well. It may be confusing for someone who has never played slots before. Frequent players, however, should have no issues with it.