Net Entertainment has created another aesthetically stunning slot game in Lost Island. The game is based on a quest to uncover lost artefacts. We imagine if Indiana Jones could play slot games, this would be the one he’s choose. Get intrepid as Net Ent whisks you off an undiscovered paradise, where riches are just a spin away. 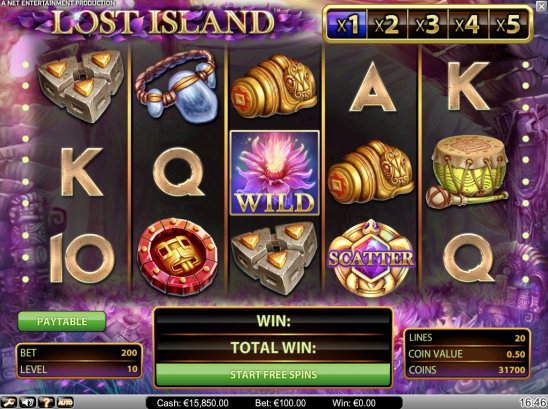 Net Entertainment are one of the most well-known names in the industry, with good reason. They are known for making beautiful slot games with fantastic high definition graphics. They tend to throw in some creative bonus features which makes a new Net Ent slot always worth checking out.

As we’ve already mentioned, the first thing that you’re likely to notice upon entering the game are the visuals. There’s no denying the artistry that’s gone into creating this gold and purple hued game. It’s set in what looks to be a tropical forest, at the mouth of a cave.

Lost Island encompasses 5 reels, 3 rows and has a total of 20 paylines. Bets can be placed for as little as 20p or as much as £100 per spin, depending on your budget. The symbols feed into the theme really well. Although we were disheartened to see the poker symbols (we always feel that they are a bit lazy), they have been given an ornate gold makeover to spruce them up. The higher value symbols all come in the form of artefacts. The red circular object with gold centre is the highest paying base game symbol. Landing 5 on an enabled payline will generate x500 your line bet.

There are a number of bonus features to keep you entertained. The first of the game’s bonus symbols is the wild. It is covered by a beautiful purple lotus flower. It substitutes for everything except scatters. It is also linked to the gold multiplier chart at the top of the reels. Each wild you land increased the value of the multiplier. You can boost your original win total by up to x5. The scatter is the other bonus symbol which pays any and activates the main bonus feature.

The golden turtle is the scatter. Land 3 anywhere on the reels and you’ll receive 10 free spins. During free spins, a wild is placed in the centre of the reels where it remains for the entire duration. Wilds can also be stacked in this bonus game which makes for a host of new winning combinations.

Lost Island is definitely worth checking out, even just for the graphics. However when we add in the bonus features, the game becomes a top choice. The ability to generate wild multipliers as you place gives you considerable leeway to boost your payouts. Although 10 free spins in the bonus game is not the highest number we’ve seen, the addition of the permanent wild gives players the edge in these rounds. Net Ent has brought to the web another fantastic and enaging slot game