For those players seeking a new slot adventure then Imperial Destiny could provide the challenge you are looking for! The game is a take on the Qin Dynasty and its Chinese emperor. If an Asian theme sounds like fun to you then this will most likely provide a few hours entertainment. We have had a good go of Imperial Destiny and listed our thoughts on the game’s content below. 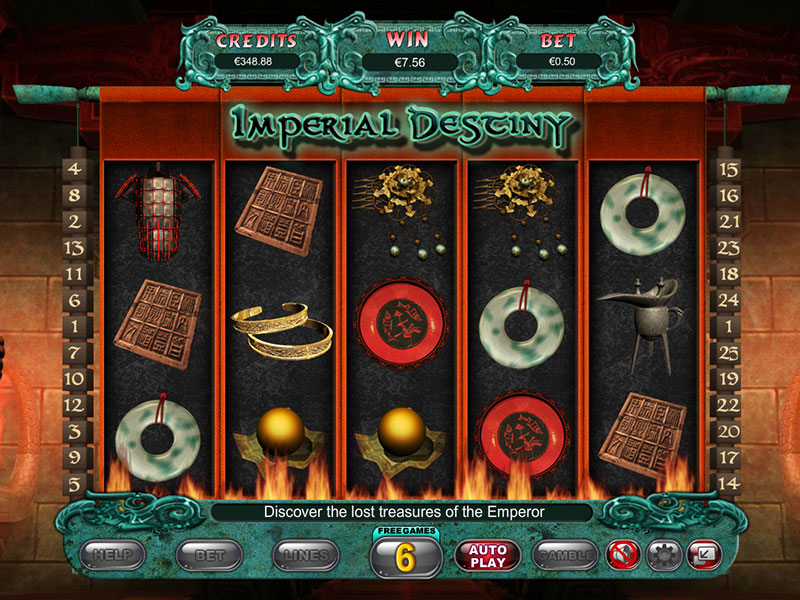 This game has been developed by Eyecon who are famous for developing heavyweight titles such as Fluffy Favourites and Shaman’s Dream. They have enjoyed a fair level of fame in the industry as a result of this cluster popular titles, which also includes the Egyptian themed Temple of Isis. You can always expect a solid performance from this team.

The structure of the game itself consists of 5 reels, 3 main rows and 25 individual pay-lines. We particularly like the Asian style theme as it brings us something different from the standard casino style games that we usually play. The fiery red background sets the tone for the gaming experience you are about to encounter and there is some really nice artwork with the slot symbols having great detail.

The game lets you bet from just a penny per spin and you can bet up to 25 lines so there is a real nice amount of flexibility for those that are on differing budgets. A tip we have found with this game is to keep most of the lines active but the bet low so that you can play with a generally low wager and not compromise your chances to win too much.

The game is based on ancient China and you can expect a variety of different reel symbols with three of any symbol creating a win. The main symbol to keep your eye out for is the wild symbol which is represented by the emperor himself. The wild symbol helps the player pick up more line wins by substituting for most other symbols on the reel thus increasing the likelihood to pick up winning combinations so keep an eye out the emperor.

The game offers a couple of bonus features with the main one being the free spins mini game which will definitely prove popular. Who doesn’t love free spins, right? The free spins mini-game is activated by the scatter symbol which is represented on the reels by the warrior, with three scatters resulting in the mini game activating.

The final bonus feature is the ability to gamble your latest win. This can be a lot of fun but is high risk for high reward so if you lose, you will lose your latest win. We would only recommend playing this feature once or twice every now and then as it can get quite frustrating.

We really enjoyed Imperial Destiny overall as it offered something a bit different while still providing a class slot playing experience. We will definitely be keeping our eyes peeled for future instalments by Eyecon.