Fans of the massively famous hard rock band will certainly want to check out this latest release from Net Entertainment. The Guns n’ Roses slot machine looks like an absolute blast so we couldn’t resist giving it a go. We’re ready to rock! 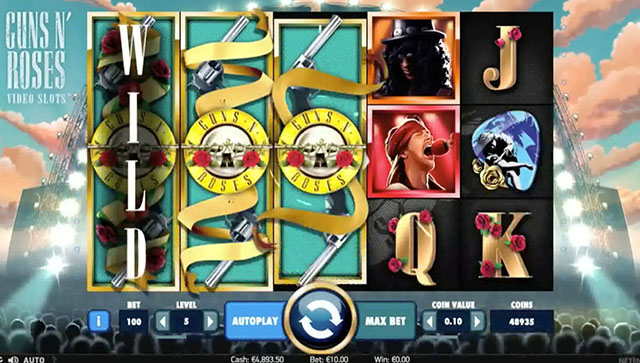 The game has been designed by those clever folks at Net Entertainment so you can naturally expect a solid game with fluid gameplay and plenty of bonus content to keep you playing for hours. The game sets the scene with a fantastic introductory animation that will get you right in the mood for playing.

Guns n’ Roses keeps things simple with a 5 reel and 20 pay-line structure. Slot players will feel right at home and the game interface is super simple to navigate so players will have no issues getting started. The background of the game consists of a blue sky and a music stage with the symbols comprising of the band members, letters, numbers and other music related items. We think the design is pretty ace and the background music is the extremely famous song “Welcome to the Jungle”!

Net Entertainment usually provides a good array of betting options to accommodate most types of player and for this game, you can bet from 20p up to a colossal £200 so the game will suit big and small budget gamers alike.

The game has some very good bonus features which are triggered by specific symbols and combinations. Firstly we have the wild symbol which is represented by the Guns n’ Roses logo and this essentially appears on all reels, replaces most other symbols and can result in an increase in winning combinations. The other main symbol is the bonus record symbol which appears on reels one, three and five and activates the main feature.

The most interesting bonus feature is the bonus wheel which triggers when you land the bonus symbol on reels one, three or five. The bonus wheel can result in a lot of nice benefits for the player and once it appears all you have to do is spin it to discover what perk you will receive. There are 3 bonuses on the wheel which are free spins, coin wins and the crowd pleaser which can result in a multiplier for your win.

The legend spins feature is another of the bonus features which randomly triggers and awards free spins with the amount varying based on the reels that it triggers on. There is also a second wild symbol known as the “appetite for destruction” in the form of a massive cross with the band members displayed on it. This can also result in some big wins.

This is a fantastic slot machine game that excels primarily due to its depth of content and the classic rock theme. Guns n’ Roses fans will love it and even if you are not a fan of the band still check this game out as it is a lot of fun.