Foxin Wins is a firm favourite amongst players. Developed by NextGen Gaming, it features a crafty fox as its mascot. It has that magic mix of a fantastic theme and bonus features which keeps players entertained throughout. 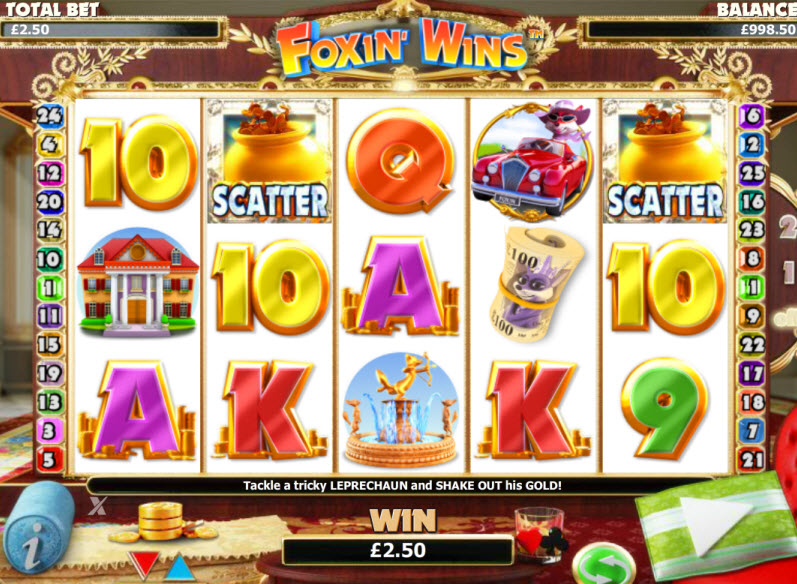 We have never encountered a terrible game by Nextgen which says a lot about the company. Generally, they produce slots of a consistently high standard so you are in safe hands playing their games. Foxin Wins is a good representation of how Nextgen setup their games so we have all the details below.

Foxin Wins plays over five reels and the game consists of a grand total of twenty-five pay-lines which are situated in front of a richly decorated backdrop that resembles a luxurious front room. The game really does a good job of making you believe that you can win big. The appearance of the game makes you want to play which is a key strategy by Nextgen and in general, the betting options are pretty decent if a little limited.

You can bet from 10p all the way up to £50 so the game can suit players on different budgets but take care when placing your deposit regardless as it is very easy to stake the wrong amount which can prove disastrous.

As we have mentioned already, the game is a visual stunner with some highly impressive detail and bright artwork. The background looks like the front room of Buckingham Palace and the reels consist of your standard letters and numbers as well as wads of cash, the fox himself and a number of bonus symbols to enhance the gameplay for players.

Nextgen gaming usually put a lot of effort into the content of their games by providing some bonus features to make their games more fun. There are bonus features to keep you entertained and these are generally utilised and triggered through the appearance of some specific bonus symbols on the reels. The main symbols consist of items that you could only afford if you led a luxury lifestyle and the bonus symbols in particular consist of a wild fox and for the scatter it is a magnificent pot of gold.

The first bonus feature is the Super Bet feature which offers the occasional chance for the fox character to appear on reel three and help create more wild combinations with the player having the choice of how many coins to use to help increase the likelihood of success for this feature. There are also free spins available and are triggered whenever the player lands three or more of the gold scatter symbols. The scatters can be found anywhere on the reels and are not linked to a particular payline. With 3 scatters, the player will be awarded 10 free spins!

The game offers more bonus features that trigger randomly and this game excels because of the sheer depth of content that it offers. This game has been out for a few years now but still reels in the customers because it is major fun with plenty of variety so check it out if you fancy a few spins!