If you are from the UK then you have more than likely had your fair share of fish and chips. Pariplay has designed a slot game with the same name and even though it is called Fish & Chips, this slot machine game has nothing to do with the local chippy. The game goes for a classic underwater theme and there are loads of interesting characters on the reels. We have all the details below. 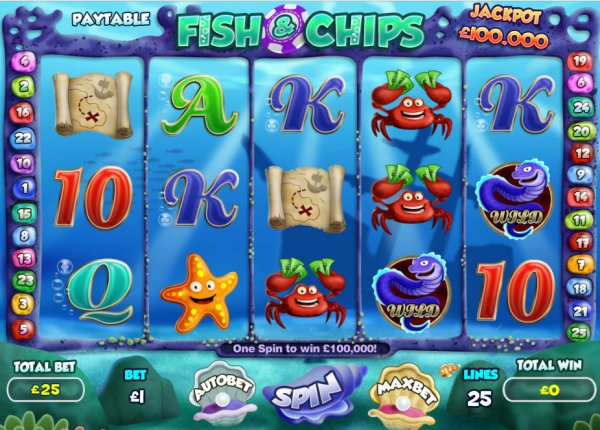 Pariplay style themselves as a development company that adds value to a casino or gambling site by providing high-quality gaming content for customers to enjoy and their games do appear to be of a consistently high-quality and are loads of fun to play.

The game consists of five reels, three main rows and twenty-five pay-lines. It has an underwater theme with plenty of colour and species of sea creature. The characters are humorous and light-hearted and generally, this feels like a very welcoming and friendly place to play slots. The shark character, for example, has a top hat and a big grin which stretches along his face. There are also starfish, treasure maps and various other symbols that you would expect from an aquatic theme.

The game has some good chances to win some big jackpots and you can bet from a minimum of 25p all the way up to £12.50 per line so overall there is good flexibility for those that are perhaps on smaller budgets.

As we have mentioned already, the underwater theme is very nicely detailed and catches the eye immediately. We think it’s great and a lot of players that try it will play the game primarily for its eye-catching design. The background is the water and the reels consist of the various types of aquatic creature with some letters and numbers with fancy fonts making up the lower value symbols. The sound effects are silly but fun and it will be down to the preference of the player whether they play with the sound on or off.

We strongly believe that a game can be nicely designed but if it is not backed up with quality content then there is a good chance that it will not succeed. Luckily for players, Fish & Chips has some good bonus features. The wild symbol is represented by the purple eel character and he can result in a multiplier for your bet when he appears anywhere on the reels.

The scatter symbol is the smiling shark with the top hat and he can also result in some decent multipliers if he appears three or more times on the reel at any given time. The final bonus feature is the purple octopus who is guarding the gold-filled treasure chest and this will activate the bonus round where you can win even more goodies to add to your haul.

We had a blast playing Fish & Chips. The game boasts the perfect balance between content and aesthetics and overall it is just a really fun game to experience so we would recommend checking it out and having a few spins.