For the football lovers out there, we have managed to find a slot game with a contemporary football theme called Cup Carnaval. From what we can gather, the game was released to coincide with the 2014 Fifa World Cup in Rio de Janeiro and has been developed by Eyecon. The game attempts to combine the main aspects of the beautiful game with the world famous Carnaval of Rio and we think it does an ok job as slot machine overall. We have since had a few spins and detailed all of our findings in this review. 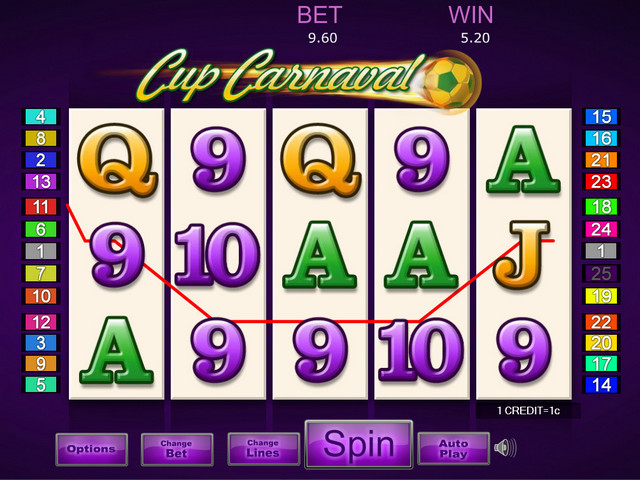 The game has been developed by the guys at Eyecon and they have vast experience of creating slots that are entertaining and memorable. Whether Cup Carnaval falls into this bracket is up for debate as there are many sports themed games available on the market.

The game follows a standard structure for Eyecon with five reels and twenty-five paylines available. The game catches the eye instantly with its bold purple background with the football theme mainly coming from the game’s logo and the symbols displayed on the reels. In all honesty, some users may find the theme slightly generic as it resembles a standard casino slot machine but it is fluid, easy to play and there are some nice bonus features which we will outline later on in the review.

For the gamblers out there you can bet from just a penny and the maximum bet that can be placed when all lines are taken into account is £60. This is fairly normal from Eyecon and offers decent variety for those on varying budgets.

The game is based on football and this is highlighted through the reel symbols with various types of football present and the reels consisting of your standard letters and numbers as the lower value filler symbols. There are also fireworks and trumpets to represent the Rio Carnival side of the game.

The game looks ok and plays well but for a slot game to do well it has to have bonus features or players will get bored rather easily. Luckily for Cup Carnaval, Eyecon are on the ball (pardon the pun) and have inserted a number of useful bonuses to keep the gameplay fun and engaging. The wild symbol is represented by the yellow and green football and acts as a multiplier when it appears on reels 1, 3 and 5. The game offers free spins which are activated by the scatter symbol represented by the female model. Up to 20 free spins can be won so keep an eye out for it.

There is also a gamble bonus feature which we like to think of as high risk, high reward. Essentially, you can play for double or nothing on your bet by guessing between two options. We wouldn’t recommend this too often as it can destroy your balance at an extremely quick rate.

This is a decent effort from Eyecon and although it may feel slightly dated the gameplay is solid and it offers plenty of variety in terms of bets and some good bonus features so we would recommend having a few spins at least to see if it is for you.