Players should not be confused about the title Black Widow as we have played slots in the past with this title such as the IGT version which focussed on some of the most brutal murders committed by various women throughout history. This game is by Atari’s Pariplay and goes for a much more light-hearted military ant themed game and it looks like a lot of fun. We had a good play and listed our thoughts below. 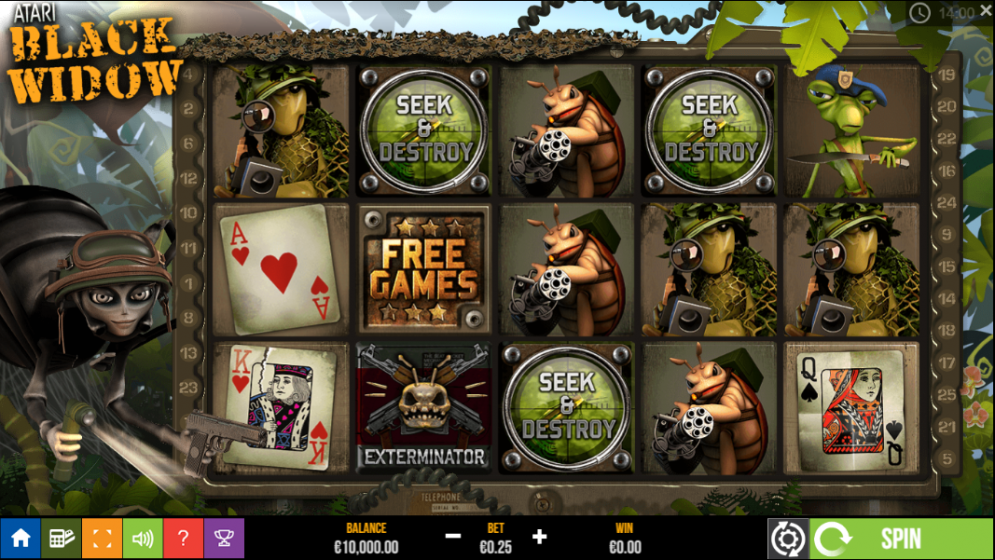 The game has been developed by Atari’s slot brand Pariplay who has a decent track record of producing slot games that are modern and super fun to play. In the past, we have played some Pariplay games and we have not been disappointed thus far. Let’s hope this continues with Black Widow.

Black Widow incorporates five reels and twenty-five pay-lines and is a very nice video slot game with some cool animations. The detail is impressive and we have come to expect this level of graphical power from Pariplay. This game will definitely be best enjoyed on a wide screen monitor. The music is silly and fun and really makes you feel like you are in among the battle with the ants as your allies.

You can bet from 25p per line so some players may find the betting options slightly high but in general, this is fairly standard practise for a slot game of this calibre.

As we have touched upon already, the game is visually an absolute powerhouse with some impressive artwork and detail. The main game interface consists of a forest like background and there are ants prepared for combat littered all over the main interface and on the reels themselves. The other symbols on the reels have plenty of variety with playing cards forming your lower value symbols and many different types of souped-up ant with heavy artillery and firearms forming the higher value symbols.
The game does offer bonus content which is good as the game looks fantastic and would be let down with poor content. Luckily, this isn’t the case and the player can benefit from a number of features. There are three main bonus features which include free spins and prize multipliers. These are triggered by the wild symbols and scatter symbols so keep an eye out for them as these are the key to winning big.

The game is loaded with content so we will just mention the main features as the best way to learn them all is to physically play the game. Our favourite mini game was Exterminator which activates when the scatter appears on any of reels 1-5. The objective is to shoot as many enemy bugs as possible to win prize multipliers. This is a tonne of fun.

The second game we enjoyed was Seek & Destroy which activated when we landed a scatter on the second reel. If you can find three of the hidden bugs then you receive a multiplier that adds to your current multiplier count. We loved this feature as it stacked on top of our existing multiplier.

We cannot really fault Black Widow. It is one of the most fun games that we have played by any developer and we had an absolute blast. Definitely recommended for all slot players seeking adventure.