If you are an avid slots fan then you’ll likely recognise Autumn Gold straight away. The game is found on many prominent bingo and casino sites and is a popular choice among slot players. The game itself goes for a seasonal autumn theme which although has the tendency to bring a fair bit of rain, paints some beautiful colours which we appreciate in this slot. 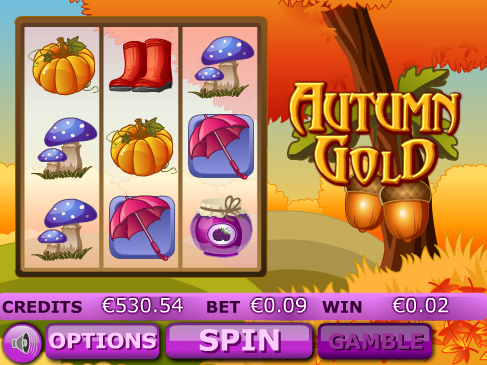 The software that runs Autumn Gold has been developed by those clever folks over at Eyecon who have a wealth of experience at creating engaging slot content for their players. The game is extremely simple and a lot of fun especially if a seasonal theme is for you. We have the details below.

Autumn is a lot of people’s favourite season due to the changes in landscape and the lovely browns and oranges that you can expect to see when you are out for a stroll in the park. The game is a three reel slot and works really well on mobile devices for the gamer on the go. There are nine pay-lines which are fairly normal for a three reel slot. It is simple, fuss-free and loads of fun.

As we mentioned the game plays over just three reels with three rows and a resulting nine pay-lines. You can bet from a tiny penny all the way up to a substantial £45 so the flexibility is there for many different types of player.

The game interface is simple and does a good job of replicating the effects of autumn. The background is a nicely detailed field with a big orange tree and orange bushes in the background. The reels consist of items you might encounter while outside such as welly boots, mushrooms, pumpkins, an umbrella, jam jars and much more. It is pleasant to play and players who are not fussed for complicated themes will certainly feel at home playing this.

Despite only being a three reel slot, the game does have a couple of bonus features to keep players interested. The bonus symbols are used for triggering the bonus content and on Autumn Gold there is a wild symbol and two scatter symbols which are really nice for a three reel slot.

The first bonus is free spins which will be triggered when three or more of the maple leaf symbols appear anywhere on the reel and the player is rewarded with 8 free games. The second feature is the prize pick with the umbrella scatter symbol appearing three times also resulting in a bonus. The player is awarded three picks and can win a range of prizes depending on which one they pick. The final symbol is the Autumn Gold scatter which substitutes for everything except the scatters.

We really enjoyed playing this instalment from Eyecon. It is a simple three slot but boasts plenty of extra features and we actually won quite frequently when we played it so definitely check it out if you fancy heading into autumn in style.